So, what most people want to know is… How on Earth did you Retire at 45???

The simple answer is, my husband went back to work so I could escape the rat race. The longer answer, of course, is more complicated. Everyone needs income, right? And most families these days need two incomes to stay afloat. But money isn’t everything. Really, there are so many factors that come into play that we need to go back a bit…

Dan and I met in 2001 and within a year, we were married, in fact, a year to the day from our first date, so we have a double anniversary. This year will be 13 years married and 14 years dating. And it’s just around the corner… good thing I have some ideas in mind for his gift already. 13th anniversary is Lace but I will put a non-consumer spin on things, as usual. Which brings me to one of the first reasons why I could Retire at 45.

1. We are not focused on materialistic consumption.

Most Americans use STUFF to fill up our lives. Billboards, magazines, high school yearbooks even, and especially TV are all there full of advertisements for things we NEED. Thus, one thing you can do to help yourself is turn off the TV. I mean, why do you think they call it your “Evening Programming”? Because it’s programming you!

Here are a couple good links to a short story that really speaks to my heart.
http://www.becomingminimalist.com/recognizing-happiness/ https://www.linkedin.com/pulse/20140501101904-16911014-the-fisherman-the-businessman  ~ both these guys are inspiration to me.

Having been brought up in this programmed, consumer culture, being able to retire early involved some additional steps. I had been buying in for years and had a TON of stuff, including debt… which brings me to my second point.

2. We eliminated debt so we don’t have to keep working for more and more money.

When Dan and I met and found blissful happiness (it was a process, but it is definitely awesome), we decided we didn’t want to live the typical American Dream. We wanted freedom, happiness, serenity and joy. And we were willing to forgo some extras to enjoy this freedom. We had a “5-Year Plan” to get out of the rat race. So, we’re a little behind schedule… More on that later.

We started looking at everything we spent. Danny had been using Microsoft Money for years (we’ve since moved to Quicken as MS Money was discontinued) so he could literally tell me how much he spent on almost everything. We set budgets for how much we could spend for dining out, fuel for the cars, entertainment, clothes, etc. And we watched where our money went. We started making double house payments. We also read Your Money or Your Life by Joe Dominquez and Vicki Robin (http://vickirobin.com/books/your-money-or-your-life/). This was a life-changing read and it helped us commit to our plan to escape to a more simple life. It focuses on how much you spend on each purchase in terms of life energy, or hours at work, (literally, your freedom) and evaluating your behaviors to see if the spending is really worth it.

Now, we still spend a lot of money – maybe more than we should. But we spend it on things that matter to us, things that last, on experiences that bring us joy, and on others. We try to live simply in many ways but focus on frugality, not deprivation.

3. We figured out what really mattered to us.

It’s one thing to know that you’re not entirely happy in your current circumstance. It’s another thing altogether to figure out how to BE HAPPY. The night Dan and I first met, and this may be the point at which I fell in love with him, I asked him what he thought the meaning of life was. He said: “To be happy and to try to help others be happy too.” So, how to do that?

We knew that working our lives away was not fulfilling us. We knew that spending time with family and friends was. We knew that reducing our expenses was key to reducing the amount of Life we needed to expend in Work. We knew that we were both willing to work hard… for ourselves and our community. We knew that preserving the planet was of utmost importance (it helps to have a place to live) and that we wanted to keep our impact low and our enjoyment levels high. We decided to find a place to be where we could keep expenses low, build a sustainable future and create community around us that was in line with our goals and beliefs. I’ll share more on how we did this and where we are now in upcoming posts.

4. We made a plan to achieve our dreams.

One of the things I believe in firmly is a Dream Page. I’ve made several in the last decade and most of my dreams have already come true. (Note to Self: It’s probably time for a new Dream Page!) And Dan made his own Dream Page a few years back too. We believe that putting to paper what you desire is a magical way of making it come to fruition. So what did we put to paper?

In 2007, we finally set our plans in motion and bought some land. 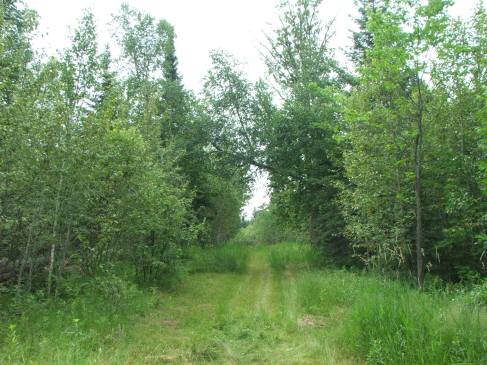 5. We believed. We worked toward our goals. We got me Retired at 45.

We took a huge step forward in early 2014. We prepped the house in Indiana for sale, Dan went to Minnesota to search for work, I started acting as if I could retire later in the year. Dan made two trips to Minnesota and in late June he did a round of 8 interviews, getting multiple offers. He called me mid-week to let me know we were moving 4th of July. Independence Day indeed.

I’m telling you that this is doable. Yes, it takes commitment. Yes, you may have to delay gratification for a short while or eliminate some things in order to have others. But it is worth it. It is possible.

So if you have a desire to get out of the Rat Race, to enjoy your life more than you are now, then start Dreaming, get to Planning and then Believe it can happen.

8 thoughts on “The Big Question”