I’ve finally done it.  I’ve moved to the Harn. 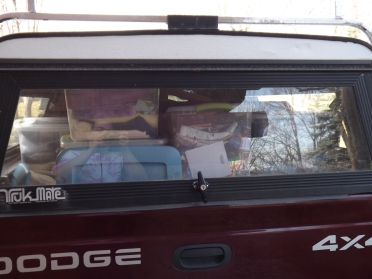 It’s a big step forward in our plan to live more sustainably and lighter on the Earth.  A plan that began over a decade ago as Dan and I realized we didn’t want to spend all our lives in the Rat Race working away all our best hours just for money and stuff.  We started with paying down a lot of debt when we had dual incomes and, as we learned more, and watched the changes in the weather and the economy, we developed a more and more detailed plan.  Like all plans, the details changed as time passed.  Sometimes the plan changed because new information was gained and sometimes because we realized (often through failure) that there was a better way.  And I’m sure that will continue as we begin the process of living at the Homestead.

Before moving, I was able to get a bit of work done with Mom and Tom – cleaning out the garage, mopping the basement floor and steam cleaning the carpets, moving in all the outdoor furniture and getting it all tarped for winter.  As I helped button up the place I’d been for over two years, I was packing to move to the place I’d been building for 10.

move meant unpacking quickly so I could drive to Bemidji to pick up our snow blower.  Lucky and I left Alex before sunrise and arrived at the Harn about 9:15.  It was 50°F inside on arrival.
I deposited Lucky and his litter box in the Arctic Entrance (AE) – our enclosed porch that acts as an air lock where we can come in from the cold and remove boots and coats and then enter the house proper without letting in a lot of cold air.  I unpacked the truck, started a quick fire to warm up the Harn a bit, and then let Lucky explore a bit.  Having no signal for text or calls to let everyone know I had arrived and was safe, I decided to head to town sooner rather than later, so I gave Lucky some food and put him back in the AE.

The drive to Bemidji became an adventure as I am guessing I didn’t quite lock down the trailer onto the ball of the hitch.  I noted it was making a bit more noise than I liked but I always feel like that when the trailer is empty.  Well, about a mile up the road, I could see the trailer swaying and realized I needed to pull over – and quick.  What a mess!  Thank goodness for the safety chains I’d purchased on our last run to town.  I was able to get the tongue back on the ball, whack things back into place, and create a lynch pin using a bungie cord locked in and wrapped around to lock the tongue down.  I checked it twice more before I turned east on Hwy 2 and all was well.  The remainder of the trip was pretty uneventful.  I was able to get a new lynch pin, picked up our online purchased “ship-to-store” washer (which turned out to be the floor model with a big dent and scratches on both sides so it was $150 off!), and our snow blower.  Dan called to say he was on his way north.

I got home and started unpacking boxes.

Started another fire and ate a bite, also feeding Lucky again – what a spoiled baby!  Dan arrived just after 4 and we off-loaded the snow blower and parked the trailer.  The washer unload will have to wait as the Smartie is in the garage for it’s own unloading… and to keep it warm for the big storm.  It was an early night and Lucky curled up with us in bed.  He’s not used to it being so much cooler!  Though the Harn will warm up with a couple more stove firings, we don’t have heated floors like Mom’s!

We awoke late in the evening to find snow falling in big, soft flakes.  The rate of snowfall was slow but it was adding up.  By midnight we had several inches and by morning we had about 4-5”.  The snow tapered off through the first half of the day and we ended getting about 5-6” total.  Not exactly the blizzard we were expecting.  That was more to the southeast.  We spent all day working away to move and unpack so didn’t fire the stove  at all Friday.  It was still over 60°F inside with the space heaters but Lucky spent most of the day curled up in one chair or another.  He’s finding all kinds of beds in his new house!  And he usually ends up between me and Dan in bed each evening.  It’s warmest there.

We also made the first batch of popcorn

at the Harn and it may have been the best batch I’ve ever made.  The outdoor grill is the only burner we have so I prepped the pan and headed out to the porch with it and my popcorn bowl.  It took forever… which means that the corn was sitting in the bubbling butter for some time.  Perhaps why it was so delicious?  I finished the rest of the batch the next day for lunch.  Fantastic!  Dan says I’ve set the bar high but I’m hopeful popcorn at the Harn will always be terrific. 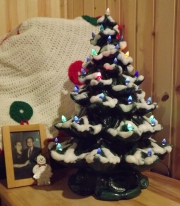 While I had Dan available, we worked more on moving furniture and adding trim so that I can continue with the unpacking this week while he’s at work.  My Craft Room is coming together!  I’ve moved around about half of the remaining boxes to be unpacked.  The half I haven’t moved is mostly books.  We have WAY too many books.  No!  There’s never too many books!!  We were able to find the Christmas tree and got it put up too.  Dan’s Mom made this tree and it’s nice and small, perfect for the Harn.

I was able to get a bit more cob done on the stove and made dinner in the rice cooker. I’m seeing quite a few dinners in this great little appliance.  It’s tiny enough that I won’t have much leftovers when I cook with it… maybe enough for a lunch or two after making dinner.  Tonight it was enough for Dan and I for dinner with a leftover lunch for tomorrow. 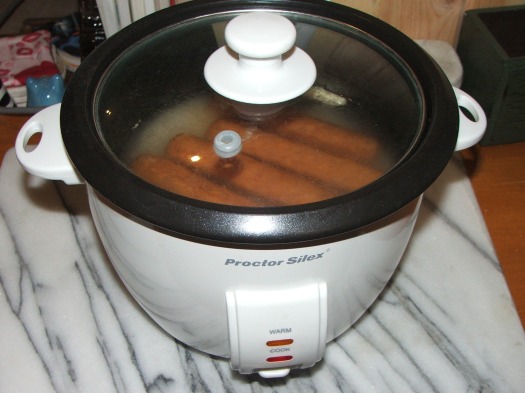 Lucky is adjusting well.  He eats and then sleeps a lot.  Sleeps some more and eats again!  Mom sent several boxes of kitty food north as she’d forgotten she already had food for Lucky when she stopped by Ron’s for some more.  He certainly is “lucky”.  I hope that Mom doesn’t miss him too much.  Of course, she plans to be up for Thanksgiving so I’m sure he’ll be glad to see her.

Hope you all have a wonderful Thanksgiving.