I had the privilege and joy of attending the Rice Lake Community screening of First Daughter and the Black Snake last week.  Keri Pickett, the filmmaker, was present as was Daniel Geiger, who edited through over 800 hours of footage to bring us a coherent and detailed film.  And though we didn’t know it on arrival, we were surrounded by movie stars as many in the Rice Lake Community were in the film.

The event was amazing.  Dawn was in the kitchen organizing when I arrived.  I then met Keri and talked with her about the movie.  She is a joyful person.  I also met Nicolette Slagle who talked with me about what Honor The Earth (HTE) is doing moving forward.  There are a lot of initiatives for starting local sustainability projects – local food, local energy (solar installation training), local art – with a focus on Pine Point as an example for how it’s done.  http://www.honorearth.org/pinepoint  Also met Kaylie, one of the young ladies facing felony charges from the Standing Rock event on October 27th.  In case you don’t recall, this was the day that Water Protectors and Law Enforcement clashed, resulting in over 140 arrests.  The event became chaotic, largely due to the excessive and disproportionate force by Law Enforcement.  I remember seeing inappropriate action when I was at Standing Rock in mid-August and there has been much evidence of the continued escalation of force against the Water Protectors.  The repercussions of Standing Rock on the Native Community continue.

By this time, everyone was ready to eat.  Dinner was terrific – wild rice, fresh fish, berries.  All the foods that are endangered by the pipeline running through this area.  These people LIVE from the land.  They rely on Mother Earth’s abundant food and they know this is what is at risk by burying pipe in the earth and using it to move some of the dirtiest products the fossil fuel industry has ever developed.  And the chemicals used to make them flow aren’t things you want to ingest… things like benzene.  These chemicals are pulled out and piped back north to  be used again.  Lots of dangerous things to be piping through the waters of Minnesota where water is the lifeblood of our economy.

The movie was powerful. Winona LaDuke is the focus with her organization Honor The Earth but there is a large portion of time spent in showing everyday people and their day-to-day interactions with the clean waters, harvesting the abundant food.  This is not easy work.  There is a detailed review of the ricing process and you realize just how much work goes into the harvest and processing of wild rice.  It’s a beautiful endeavor that brings delicious food.  And, as hard as it can be, none present at this screening are willing to risk it for a Tar Sands Oil pipeline.

At the end Keri asked what we thought and I piped up with my typical but sometimes inappropriate humor, “You should bill it as ‘See Winona LaDuke naked’.”  You see, there was a photo of her as a toddler in the film, completely naked, a toy gun dangling from her hand.  It was the most adorable photo and I realized later that this is kind of a metaphor for what the film actually depicted.  Winona bares herself, shows her home, shares this process revealing much about her fight, her friends, her family and fellow Water Protectors.  The film tells a story of all that is precious and in need of protection from the pipeline plans.  And, (spoiler alert!), in the end, she shoots them down.  The Sandpiper line was abandoned by Enbridge.  We won.

And then we lost.  Kind of.  Enbridge moved from Sandpiper to Dakota Access.  While this was a loss, as we didn’t prevent the completion of the pipeline in North Dakota as hoped, it can’t be considered a win by DAPL proponents either.  You see, the pipeline has yet to flow.  They are testing the line and keep finding leaks.  Gee… I think some Water Protectors mentioned this as a concern and here we are.  LEAKING!

And the work continues.  We now are facing the long haul to prevent Line 3 in Minnesota. What do we need to do?

How to write good comments:  The best comments point to specific sections or page numbers of the DEIS and explain precisely how and why they are inaccurate, incomplete, biased, based on unfair assumptions, etc.  It is also good to reference credible sources of information that you think the State should take into account.  Feel free to include personal stories or accounts of how the project will directly affect you, your rights, your community, the resources you depend on, etc.   Comments such as “Please build the pipeline because I need a job” or “Water is Life, No Pipelines!” do not have much impact…but may be counted in an overall tally, so something is better than nothing!  ~ From Honor The Earth website

This will be a harder fight than we might imagine.

There is much going on of which we are not aware.  Just today, Dan and I had two young men enter our property without permission.  They THOUGHT they had permission.  They’d talked with their Enbridge contact that morning and were under the impression we had been contacted about the pipeline project and that they had a right-of-way.  I explained that Enbridge has not been in contact and we had no information from Enbridge about the possible reroute of the pipeline through our back yard.  We found out about it when, several months after orange flags showed up along our East property line, the neighbor mentioned that pipeline people had been by to talk with them about putting the line through their property.  Only the property in question wasn’t that neighbor’s property. Seems Enbridge has a piss poor understanding of plat books or just doesn’t comprehend how maps work.  These neighbors had no property in the proposed area of the pipeline re-route.  They pointed the oil man to our neighbor to the south who owns the piece in question.  The pipeline people reportedly noted they, “had talked with him”…  Didn’t sound like they’d made much progress.

I also let those boys know that they ought to be careful as most folks up in these parts aren’t real keen about strangers coming onto their property unbidden.  Some even have guns and will shoot first and ask questions later.  They appeared to be nice boys and they may end up being on the right side.  Seems they work for West which does bat surveys.  You see the Long Eared Bat is endangered and they are looking to do surveys to find out if these bats are present on the proposed pipeline grounds.  Sounds like Enbridge is looking closely at this re-route to run through our neighbor’s property…  And maybe a bat will save the day and stop Line 3.  In the end, they decided to leave until they could figure out where they were really supposed to be.  I told them they should ask Enbridge to be in touch at the address on the mailbox at the driveway.  We also gave them our number.  It might make me feel like they actually care about communication with the people they are potentially going to affect.

So glad we attended the movie screening for First Daughter and the Black Snake.  It was an encouragement.  I know it’s just a small group but there is a lot of power in this little group of people.  You can see more here: http://www.blacksnakefilm.com/ 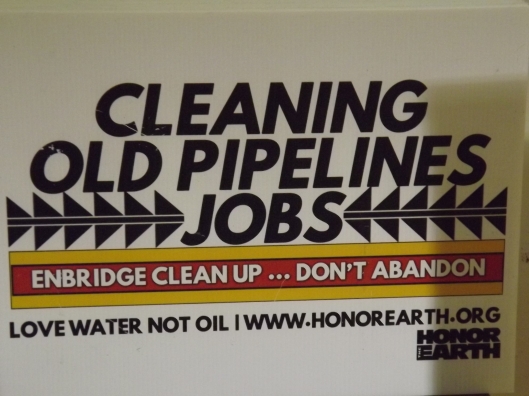 All the yard signs at that event were taken by the end of the night, but my favorite is the one that supports Enbridge cleaning up their mess with pipeline removal.  Now those are some jobs we need.