This past week, Minnesota Environmental Justice advocates got some good news. Yeah, we lost with the PUC, but we saw the tide turn with the actions of one PUC Commissioner with not only a smart brain and big heart, but also some HUGE balls. (And boy, was Enbridge upset! Hope they’re envisioning the hard work of packing up and taking their Line 3 project back to Canada… where, you might have noticed, there is growing opposition to fossil fuel corporations. And the Wet’suwet’en People are grateful for those supporting their Sovereignty.)

So I decided to send a little Valentine to Matt Schuerger from our Minnesota Waters. 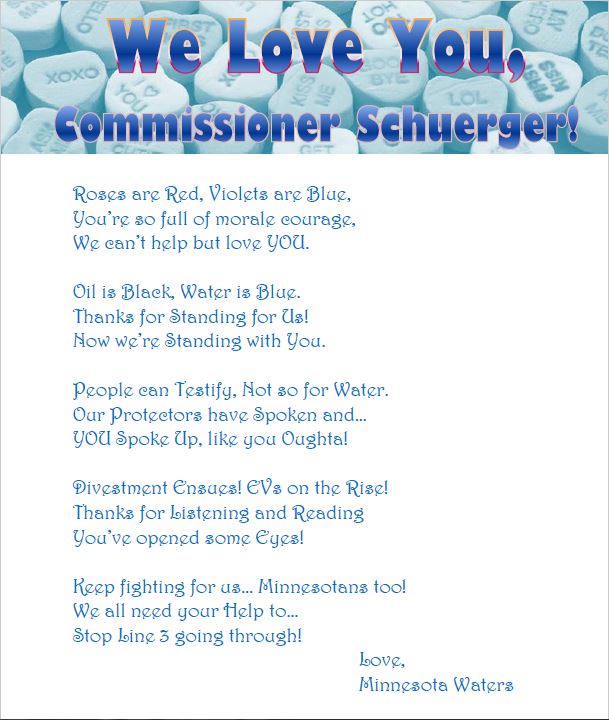 You can send one too! Need some help figuring out how? Click Here. Please help make my dream come true – let’s flood the docket with Valentines for Commissioner Schuerger.

I can imagine little groups everywhere making valentines for Matt. Maybe your youth group could have a learning session on Line 3 to share information about the dangers a Tar Sands pipeline brings to our wetlands. Do your friends know there are 227 water crossings for this pipeline proposed route? Could you take an hour to make some valentines as you learn about the myths* of “Safety of New Pipelines” and BitCrude technology, which allows completely safe transport of solid bitumen (tar sands in sold form are not flammable or explosive AND are safe for marine life if the containers go overboard!). No more concerns about train derailment!! The worst that happens is you have to pick up a bunch of hockey pucks and put them back in the rail car! [Then next month your group can write letters to our Governor asking for new green energy jobs instead of dirty old fossil fuel energy jobs for Northern Minnesota.]

Enbridge has lied to us for long enough about their safety and jobs. PUC Commissioner Schuerger has done his homework to come to the following findings on their proposed project, which led him to vote in opposition. Note: The time stamps correspond to the video of the 2/3/20 full PUC meeting with the parties. I encourage you to check out some of the powerful testimony, especially the favorites I share below.

After Tuma makes a motion to approve EIS Adequacy, Sieben asks for discussion (of which there is none) and Matt gives his “deliberation” (as the Chair referred to it several times during the meeting). 2:28:52 “I disagree.” He notes impacts of Lake Superior watershed being critically important.

“I do not support the motion before us and I’d ask that we vote this motion down and that we refer to this to contested case with a focus on gathering additional information on the changed circumstances around the change in the applicant’s business and contract structures, potential impact of electrification of transportation or other sectors, and the impact of climate change on demand.”

“We’re a Living Culture! You’re putting that at risk.  What don’t you get about the 1855 Treaty?”

One of the BEST moments of the day was when Akilah Sanders-Reed explained to Chair Katie Sieben – as Ms. Sieben tried to deny the Youth Climate Intervenors their rights, that YCI would take the 5 minutes ceded to them by the Northern Water Alliance. [So, fuck you, Katie Sieben! Oh, sorry, did I say that out loud?? I did in my living room as I watched it happen!]

“You have 5 minutes to present your opening statement. We’re not going to allow for more compression of time at this time because we don’t have the Northern Water Alliance folks here.”

PUC Chair Kaite Seiben tries to silence the Youth Climate Intervenors – pretty much in line with how they’ve treated the YCI over and over again – Oh! kinda like the government has always treated our kids – as best seen and not heard. They didn’t pull this shit with any of the male lawyers using this tactic. Watch from 3:26:04

“We’ve communicated with them explicitly and I would be happy to show you the communications where they asked us to absorb their time so that we could cover issues that are of interest to both of us. So we’ll be taking the ten minutes as was stated in the notice from the Commission that parties could combine arguments for the sake of fluidity.”

Akilah Sanders-Reed explains to Chair Sieben how this process works. Once again, youth speaking to truth and power in these days where adults have seemingly lost that ability.

So we lost, but we’re seeing the tide turn. We’re losing better each time. And now we have a Commissioner on our side.

If you can’t get enough, here’s another great blog on this issue.